I was the field support manager at Multisonics, Inc., in the mid-seventies when the company hired Donald E. Yost, a retired engineer/operations manager from Fairchild Semiconductor. Don was a colorful fellow and brought in to referee the fighting between our VP of engineering and VP of sales. Don conducted many informative meetings over a year and a half, among the staff at Multisonics, and I was privileged to attend many of them.

One day we were squabbling about some aspect of the development of our System 220  traffic control system, and he told us this story.

He said, “In the west,when we want to build a tunnel through a mountain, we get all the high-tech gear we can lay our hands on. We aim a laser at the mountain and start digging with the best earth moving and tunneling equipment in the world. After several months, we have a perfectly straight tunnel through the mountain, mission accomplished. In china, they have an abundance of people and not the best technology, so they do it differently. They get a large group of people on one side of the mountain, and another group on the other and they dig for months and months. If they meet in the middle, they have a tunnel, if they don’t, they have two.”

This sage advice remained with me and I have put it to use on several occasions. Once, I used it when I needed to change the logo of Computer Aided Management, the authors of ViewPoint, a PC-based project management software product. The change was necessary since the company’s logo consisted of three letters, CAM in a stenciled lettering font. Someone in the media at the time pointed out that it looked warlike and reminded them of Cambodia. 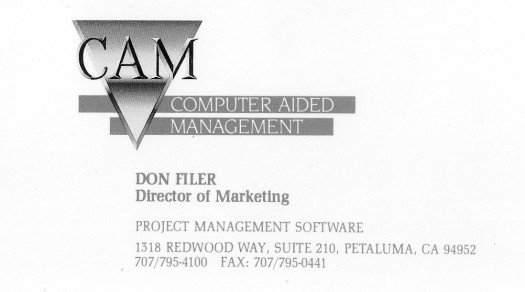 The project to get a new logo was already underway through a design firm in Sausalito, California when I was hired at CAM. So I inherited their design effort but was not impressed with the way they treated me, their progress, or the design, so I proceeded to commission another design firm to produce a logo as well. The new company was very responsive, took the time necessary to dig into our business and our product, and produced a killer design using a symbol we used in the product. The first company’s effort looked like a poor rendition of a computer mouse, the second, like a 3-D brushed aluminum, very modern symbol, just what the company needed.

This idea came to me again, when another client who was interested in having me produce a radio advertisement, asked, “What if I don’t like it?” I replied, “I will do two, and you can choose the one you want.” I went away, wrote the copy for the two ads, hired a celebrity impersonator, rented time in a recording studio and produced two ads. When I demonstrated the ads to the client he told me he liked them both, and so he paid for both of them.

The other day I was comparing notes with my friend Hal Miller who recently left Verizon for greener pastures and he was describing how the company makes all the decisions for the sales teams. They move individuals around to different managers and assign customers to salespeople randomly, and it reminded me of two things.

One is the way very large organizations who survive over the years develop systemic problems. You’ve no doubt heard about the Veterans Administration or other government institutions who have problems getting much right, and the other is how HP handled that problem so it never became a systemic crisis.

Interestingly enough, change is the key, but random changes that interfere with a team’s chemistry is not a good way to go. At Hewlett-Packard, everyone has to change their position on the floor where they work. Abou

t every three years or so, we would be reorganized, but all we did was take everything we had and move as little as 3 feet north and 3 feet west. Lots of people were involved in making these move changes, and I noticed it did break up the monotony of our work. A big/little change like this is less disruptive to team chemistry, but it has the desired effect.

Extra large organizations try to fix problems through reorganization as well as change management. Too many of the policy changes forced on employees are tiresome, bothersome and don’t achieve the desired results. Moving departments from one office building to another can make enough of a change to get the employees engaged again. We all have management changes that happen because people are promoted or lost through attrition. That’s the only time we should have to adjust to a new manager. When we move to a new group or are promoted, we often find ourselves reporting to a new manager and that’s fine, and the way the system is supposed to work.